The last time I saw her was a few years back.  We had been waiting in line for quite some time and were just being seated at our table at the IHOP that had recently opened in Lethbridge. Teresa had already eaten and was just leaving … but after enjoying one of her big warm embraces she slid into our booth for a quick catch up. We ended up chatting for about an hour before we even ordered … annoying the heck out of our waitress … but it was so good to see her again!! I remember she recommended the Red Velvet Pancakes! 😊

I met Teresa some 30 years prior in the small, rural town of about 900 people where we were both living at the time. Aside from the fact we were going to be on the same ladies slow-pitch team we seemed to have very little in common.  I’m not exactly sure what drew us together because Teresa was single and I was married.  She had no children and I was the mother of three daughters.  She was strong, athletic and more tom-boyish.  I was a bit scrawny and entirely, totally and completely a girly-girl.  Teresa was more earthy … a sweat pants and t-shirt kind of gal.  I, on the other hand, was more likely to show up at ball practice wearing purple mascara (it was all the rage three decades ago!) and a color-coordinated outfit complete with some ‘sporty’ accessories.  She was small town savvy with a warm and welcoming spirit. I was a transplanted big city girl more rooted in the cosmopolitan energy of my urban upbringing.

I was the consummate people-pleaser and Teresa was all about telling it like it is.   She also didn’t mind making a little mischief and pulling a few pranks every now and again. Such antics made me a bit nervous.  I was such a goody two shoes … always worrying about doing whatever was appropriate.  No one could string together a bold, bright and bodacious list of cuss words like she could!  She did it so effortlessly and exuberantly and with such delightful flair.  Ha Ha.

I just can’t help but chuckle as I reflect back on her most delightful mix of spectacular sparkle and gregarious grit.  Our connection clearly transcended all these more superficial differences.  Maybe she saw clear through to the insecurity tucked safely behind my ‘I’ve got it all together’ mask.  Maybe I saw through to the hurts hiding behind her cheeky and mischievous grin. Yes.  I think it’s fair to say our hearts spoke clearly to one another.  I remember sharing some tender and intimate conversations about life and love and our ‘maybe one day’ dreams.  And, of course there were oodles of loud laughs.  I will never forget her contagious and very unabashed propensity to push the boundaries until we howled with laughter!

As I shared, the first time I met Teresa we were putting together a ladies slow-pitch team.  We called ourselves the Hayden’s Hosettes.  Somehow we thought it apropos to name ourselves after the infamous ‘hoser’ routines inspired by the renowned Bob and Doug McKenzie.

Meet one iteration of the Hayden’s Hosettes!  Given the look on Teresa’s face (far right), I am guessing she said something cheeky (or entirely inappropriate) that really struck me funny (second from the left). I see from the caption that we took the trophy for first place in 1987!  I could be wrong but I think we claimed that honor for a few years.

Speaking of trophies … Teresa engaged her creative artistry one year at our year-end team party. We ‘roasted’ each other lovingly and Teresa made me an exceptional one-of-a-kind trophy!! I was the pitcher and always wore shin pads to protect myself from the line drives coming right back at me.  So, anyway, Teresa fashioned up a ‘shin-pad’ trophy made from two long, winged, thick and super absorbent maxi pads! To say it was priceless is a complete understatement. Words alone cannot do it justice! Sadly, I can’t find my picture of it … but I KNOW I had one! So, if anyone of you Hosettes out there still has a picture of it, I’d sure appreciate a copy!!  Anyway, here is a verbatim copy of what Teresa said when she presented me with her artistic masterpiece! 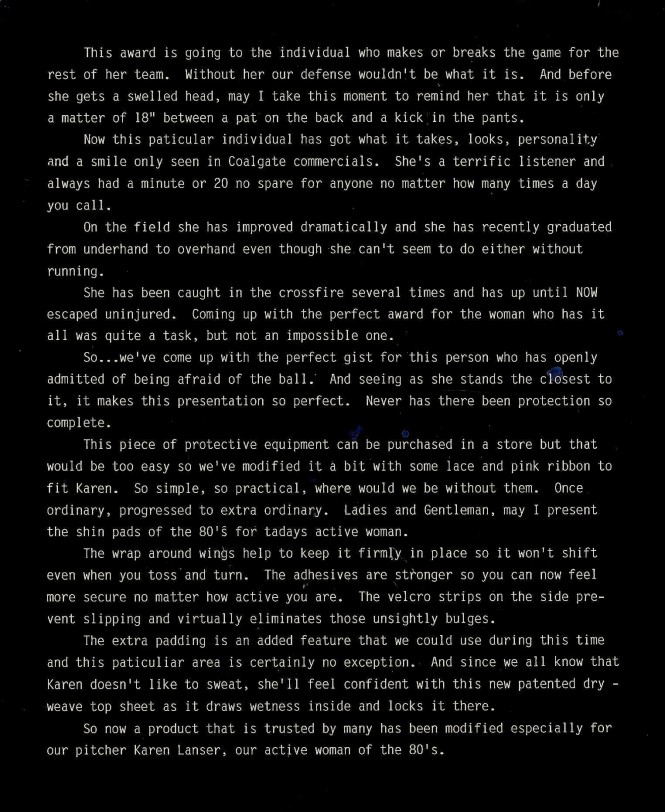 Teresa was always full of surprises. One year on my birthday she told me she would like to take me for lunch.  I could not believe my eyes when we arrived at Nonna’s Pizza and I discovered she had organized a surprise birthday lunch for me!  The tables were filled with my team-mates … and … my heart was filled with humble and deep gratitude. ❤

Yes.  Teresa was one of a kind.  Whenever she’d get a twinkle in her eye and that mischievous grin crossed her face we knew were were in for some good ole fashioned fun and frolic!  There was a lot of that whenever she was around.  She and I partnered up and played a season or two of wally-ball together too! Yes … we spent many a Friday night in the racquetball courts behind Fishers Pharmacy playing four-person co-ed volleyball using the walls on the court!  I don’t think we won any trophies, but we certainly shared some smiles as we bounced those balls back and forth.

Teresa touched so many people in so many meaningful ways!  In fact, so much so, that three times as many people as were expected arrived to pay our respects and celebrate how much she impacted our lives!  Although Teresa moved away from our little town to the city some 25ish (?) years ago, she never moved out of my heart.  We didn’t see much of each other after than geographical shift, but her exceptional presence stayed etched in my heart.

My life in that little town was infinitely better because of you Teresa Ann Ternes.  And, although you have left this earth long before anyone ever anticipated, you have not left our hearts. A piece of your spirit will stay with me always.  Thank you for accepting me … for lovingly scoffing at my various foibles … for compassionately seeing beyond our superficial differences … and … for sharing your heart so generously. You were such a special gift to me.  You always will be.

And the beauty of your special soul forever lingers ❤ … Karen

5 thoughts on “Teresa – A Fond Tribute to your Spectacular Sparkle and Gregarious Grit!”

I'd love to hear your thoughts ... Cancel reply

I guess it depends on where I am setting my gaze, but there are so many, many, many things to be grateful for … on so many levels … micro, meso and macro. I don’t even think I could create a specific list that fully encompasses or adequately exhausts my appreciation for all the ‘beings’, […]

JOURNAL PROMPT – March 16, 2021: Do you share your vulnerabilities with others? Why or why not?

You know, for the first 40+years of my life my vulnerabilities were tucked tightly behind my shiny façade of perfection. I was all masked up so no one would be the wiser of my shoddy genesis. In addition to trying to outrun my shame with my perfectionism, I tried to distract people from seeing too […]

JOURNAL PROMPT – February 25, 2021: What life experience has strengthened you the most?

The answer to this journal prompt is easy. The life experience that has strengthened me the most was the life experience that I thought was annihilating me forever. My eldest daughter left home two months after her 15th birthday. After growing up in a less than Hallmark home, I had invested so much effort into […]

There is no doubt about it … the old boy and I are in the final quarter of our lives. And, this reality has been taking up more space in my awareness of late. I noticed myself thinking the other day that I have had a pretty good life. And then of course, in true […]

Oblivious by design or choice … ??

Yep. See that cranky ‘WTF’ look on that bird’s face? Pretty much captures my feelings about the first six months of 2020. The year was not anything like what I was planning. My “2020 Vision” was to head into what is realistically the ‘last quarter’ of my life checking things off my bucket list. I […]